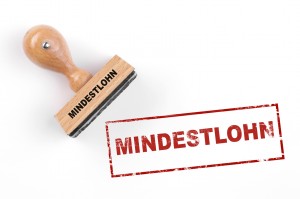 As from January 1, 2015, there is a legal minimum wage of 8.50 euros per hour for the first time in the Federal Republic of Germany. Germany is now one of the 21 out of 28 member states of the European Union to have a cross-industry minimum wage.

About 3.7 million workers from the low income segment can now profit from it. Through the introduction of a minimum wage, employees with unreasonably low salaries are now protected. Thus it should contribute to a fair and functioning competition and reduce the number of workers who despite full employment are obliged to rely on social welfare.

Employers will have to respect the statutory minimum wage, valid from the beginning of 2015, or otherwise will face back pay and fines as high as 500.000 euros.

There are inevitably a few exceptions. For example, the new law stipulates that children and adolescents without professional qualifications, trainees, volunteers and interns are not required to be paid the minimum wage.

The minimum wage is valid through all branches without exception. For branches with wages traditionally lower than 8.50 euros, there is a transition period of three years until December 31, 2017, which foresees a gradual adaptation to the minimum wage. Until then, lower wages are still allowed.

With the introduction of the law on minimum wage, employers have the obligation to record the working time of marginal and temporary employees as well as of the economic sectors employees, as called in paragraph 2a of the law against illegal employment. The same obligation applies to temporary employment agencies. The records of the beginning, end and duration of the daily working time must be kept during at least two years.

The law on minimum wage provides that employers who are based abroad but active in Germany in the branches described in paragraph 2a of the law against illegal employment have to submit a written statement in German on an official form to the competent authority of the customs administration prior to any work or service.

In the event of non-payment of the gross minimum wage to the employee from the employer or subcontractor, the law on minimum wage provides the liability of the German contractor for the net remuneration.

Controls on the compliance of the minimum wage provisions are carried out by the Financial Control of Undeclared Employment (FKS) of the Federal Customs Administration. In order to be able to control the compliance effectively, the FKS will soon create 1.600 new positions.

This entry was posted in English, German, Spanish and tagged germany, Minimum wage.